We, the Robototes, are outraged by institutional racism against the black community in our country. We feel it is our obligation to fight to end racism and the injustices it brings. We will not stay silent.
We are fighting for human rights and the unity of humanity. We must use our voice to help educate and spread awareness of the inhumane acts of violence being committed towards black people within this country. Black Lives Matter.

When we say black lives matter, we aren’t saying all other lives don’t matter; rather, we have to help those who really need it. All lives can’t matter until black lives matter. For hundreds of years, our black brothers and sisters have been oppressed and silenced from slavery to segregation to systematic racism, and it needs to end now.

“If one house is on fire, doesn’t mean we should spray water on all of them.”

We recognize that our team hasn't spoken up about these issues. However, we are working to remedy this by working both in our team and our community to increase equity, especially in terms of STEM learning. Please check our website for more information.

On Saturday and Sunday, we competed in our first competition of the year at Glacier Peak High School, hosted by the Sonic Squirrels (team 2930). We were very excited to compete with Harry for the first time, despite a few programming errors. We loaded in our pit and robot on Friday and got through inspection on Saturday morning.

We played the first match of the competition on Saturday, which unfortunately ended with our robot getting disabled. However, the day improved from there as we worked out some code problems and made a few mechanical tweaks. Other team members focused on our Chairman's presentation and scouting as well as watching our matches (and cheering, of course!), and we were able to finish out Saturday with a record of 5-4.

Hanging out with our #Bellevue Alliance friends

On Sunday we continued improving our robot, finally getting our climb system working! This was exciting for everyone on the climb subteam as well as drive team, as we were finally able to climb during one of our matches. However, we still faced several difficulties (our Ethernet port broke!), as well as a difficult match schedule, and went into alliance selection with a record of 6-6, ranked 22nd. A few team members also spent Sunday morning giving the "sales pitch" to teams in picking positions, hoping to ensure that we would be invited to join an alliance.

During alliance selection, we enthusiastically joined the 3rd seed alliance, led by Team Pronto (3070) and Murphy's Law (4681). Unfortunately, we were defeated during quarterfinals by the 6th seed alliance, which included event finalists Spartabots (2976), Sonic Squirrels (2930), and The Roboctopi (4918). However, we were happy with our performance, given the issues we were having at the beginning of the competition.

We enjoyed the rest of the elimination matches (interspersed with the occasional dance break) and got a welcome surprise: during the awards ceremony, our team was presented with the Entrepreneurship Award due to the hard work of our Business team! After the competition ended, we helped the volunteers tear down and pack up the field, and then retired to Red Robin for a well-earned meal.

Our Business team with their well-earned award

We're looking forward to competing at Auburn Mountainview next week, hopefully with an improved robot and some drive practice.

Good luck to everyone, and 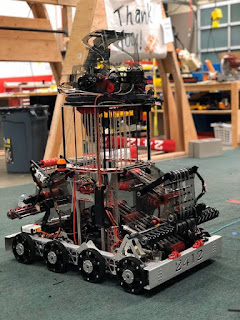 He likes to be called Harry!

Today we finished assembly and testing and transported everything to Glacier Peak. Good luck to all teams competing this weekend!

See you on the field, and

We've been working on finalizing our robot, from connecting electronics to mounting our final subsystems. We've had to work through several mechanical and programming setbacks, but so far, have managed to find solutions to all of them. Everyone on our team's getting a little tired and stressed since competition is so soon (it doesn't help that we've been staying in the shop until 9, 10, or even 11), but we're excited about everything we've done so far.

We'll be announcing our robot soon!

We made a lot of progress today! First and foremost, our robot now has (most of) its systems (almost) completely integrated and (sort of) operational! Probably the most exciting part of this was watching our robot shoot by itself, scoring in the high goal several times from several different places in our shop (there was a lot of cheering involved). Programming still has a lot to do, but it was amazing to see how far we've come since even the beginning of the week.

A few other groups continued work on awards and general shop organization, as well as our one remaining system that hasn't been finished yet - climb. However, everyone's moving quickly, and we're really excited to compete with our robot this weekend.

We also had tacos for dinner again! It was nice to have something other than leftover pasta, and everyone really appreciated it.

Today, we held our competition information meeting for everyone on the team! We also got our new shirts and sweatshirts, which we're excited to wear at Glacier Peak this weekend.

For the rest of the meeting, (most of us) finally got to testing (except climb. Climb needs to finish building, but they had yet another setback today and we're starting to think they're cursed). Programming especially had a lot to do, as they're cramming all of their code testing into a few days. However, it's looking promising! We still have a lot to do, though.

And finally... we decided on a name for our robot! We've been debating several (rhyming) suggestions for the last couple of days, but we finally put them up to a vote. We'll be announcing the name with our finished robot, but until then, here are a couple of hints: it's a boy this year, it's bigger than a raven, and he's got a nickname!

Today, most of us worked on making terrible metaphors about tiling integration, programming, or our climb subsystem. Our robot is definitely coming together, almost enough to be driving (and definitely enough to have electrical issues). We also started brainstorming names, many of which have a lot of... ptersonality. We didn't have very many people there today, but it was nice to see everyone working! Some of our mentors even started cleaning up the shop, since it's gotten (more than) a little messy over the course of build season.

In other news, we had some pasta for lunch (since we have a bunch of random food in our fridge now). However, the mentors did have some trouble getting everyone to stop working and actually eat when the food was ready.

This week, we're hoping to finish mounting the rest of our systems, as well as get programming and drive practice done. We're going to have to work pretty hard in order to be ready for our first competition on Saturday, but it's nice to know that we're getting stuff done.

Today our friends Wolverine Robotics (949) from Bellevue High School came and shared our shop! We had a lot of fun showing seeing their robot (which looks really cool, by the way!). There was also a bit of a spontaneous dance break during a delicious barbecue lunch (we've got to practice for competition, right?).

Our team is also getting closer and closer to a finished robot! Most systems are just about ready for integration, which is terrifying promising for programming and drive team. Because of this, we're going to have a reduced number of people at tomorrow's meeting. We're hoping to get some testing done, or at least finish most of our integration.

Today, a lot of our subteams made great progress! The day was filled with lathing, cutting, drilling, testing, and, of course, use of the trusty Part Persuasion Device (the mallet. We used the mallet a lot). Our shooter is looking better than every, since several people spent most of the meeting testing it (complete with loud cheers every time we scored in the Inner Port). Our drive base is also looking great, and everything else seems to be coming along nicely.

With a few exceptions, of course. One of our subteams accidentally ordered the wrong parts due to a CAD mistake and spent a while freaking out trying to solve the problem by asking other teams for parts. Thankfully, we were able to get what we needed (we hope) due to a gracious contribution by Saints Robotics (1899). Yay Bellevue Alliance!

On another note, we ate lunch outside today! We had a tasty rice dish and some awesome desserts baked by our captain (thanks for the sugar!!!). Hopefully the fresh air did us some good... (the shop is starting to smell like we're spending too much time in it).

Overall, we were pretty productive, and we hope to keep doing so tomorrow.

Today we made great progress with attaching sub systems to the robot! We also fixed quite a lot of "future problems" by cleaning up all of our electrical wires (unlike last year) and fixing our lift plate.

Programming also got to do some tests on the robot which went well.

In the upcoming days we hope to have a complete robot for programmers and drive practice, until then: